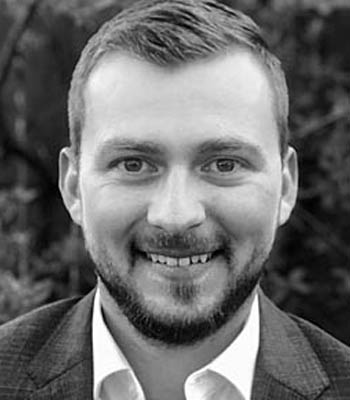 Tyler Svitak has built his career solving problems at the intersection of technology and urbanism. Tyler has held strategic roles advancing electric, connected, and automated mobility initiatives at the City and County of Denver, Colorado Department of Transportation, and American Lung Association in Colorado, where he led or contributed to some of the most innovative smart mobility projects and policies in the country.

Tyler became the Executive Director of the Colorado Smart Cities Alliance in 2019, which is the first and only statewide coalition of public, private, academic and research organizations committed to advancing smart cities initiatives across sectors and jurisdictions. Tyler leads the membership-based organization as it develops a new model for building smarter communities and regions. The Alliance manages a portfolio of projects that leverage innovative technologies, like 5G, to improve challenges facing the state through partnership and real-world deployment. Tyler has been leading the Alliance’s role in AvCo, the nation’s largest electric, automated transit service aimed at improving public transit.

Prior to joining the Alliance, Tyler spent many years as an established veteran in the emerging mobility industry. Tyler started and led the connected and automated technology program at the Colorado Department of Transportation, where he managed a portfolio of $100+ million in connected and autonomous technology projects, served as the State of Colorado’s first-ever subject matter expert for CAVs, secured $20 million BUILD grant from the US Department of Transportation to build the nation’s largest V2X infrastructure network, and oversaw the implementation of a $72 million V2X contract with Panasonic .

Tyler began his career aiming to reduce pollution from the transportation sector in 2011 when the first EVs hit Colorado streets and the first statewide EV plan was undertaken (Fostering Electric Vehicle Expansion in the Rockies). He has led infrastructure planning, policy, and program initiatives to accelerate the deployment of electric vehicles in several roles since then. He developed a $24 million transportation electrification plan for the City and County of Denver’s finalist application to the US Department of Transportation’s Smart Cities Challenge, which included public-private partnerships and strategy to double the growth rate of electric vehicles in the City. While he was at the City and County of Denver, he secured a multi-million grant from the US Department of Energy to electrify transportation network companies in partnership with cities and private sector companies across the country.

Tyler also led the US Department of Energy’s Clean Cities Coalitions while at the American Lung Association, where he worked with hundreds of stakeholders (cities, vehicle fleets, utilities, private companies) to reduce petroleum consumption in the transportation sector through fleet auditing, educational events and test drives, research and programming.